As U.S. Naval Aviator Lt. Geoff Vickers started to push on the stick, he heard a loud pop, followed by a roar. He knew exactly what had happened and he transmitted, “Lion 52. Emergency, my RIO just ejected”

In 2002 Vickers and Fighter Squadron 213 (VF-213) Black Lions were detached to Naval Air Station (NAS) Fallon, Nevada, for strike training when he was tasked with giving the battle-group-air-warfare commander an orientation flight in the F-14D. As skipper of the cruiser in charge of the battle group’s air defenses he had had the chance to experience several E-2C and EA-6B flights, and he remarked the fact that the Prowler guys hadn’t been able to make him sick.

Vickers recalls: “I told the Captain that after the G-awareness maneuver, we would do a quick inverted check to verify cockpit security. Looking back, I should have recognized his anxiety when he mocked me and said, ‘Just a quick inverted check?’ then laughed. I didn’t realize hanging upside down with nothing but glass and 11,000 feet of air separating you from the desert floor might not be the most comfortable situation in the world for a surface-warfare officer.”

After the take off, Vickers checked the airspeed and then he inverted the aircraft. “I decided not to really put on a lot of negative G and unloaded to about .3 to .5 negative G’s-just enough to make anything float that wasn’t stowed properly. If he was uncomfortable in such a benign maneuver, it would be better to find out then, rather than when we were racing toward the earth during a radar-missile defense.”

As Vickers started to push on the stick, he heard a loud pop, followed by a roar. The cockpit filled with smoke, and they suddenly lost cabin pressure. “I first thought a catastrophic environmental-control system (ECS) had failed. I said to myself, ‘This is new. I’ve never even heard of something like this happening.’  I knew the first thing I had to do was to roll the jet upright and assess the situation. About three seconds after the first indication of a problem, I had the jet upright and knew exactly what had happened. I transmitted, ‘Lion 52. Emergency, my RIO just ejected.’ “

While Vickers was thinking he would have to make all the calls in the blind since he thought that all the noise of flying at 320 knots without the canopy would have never allowed the communications, he heard Desert Control contacting him: “Understand your wingman ejected?” “Negative, my RIO ejected. I’m still flying the plane.” “OK. Understand your RIO ejected. You’re flying the plane, and you’re OK?” Vickers replied he was ok but he didn’t tell he was flying a convertible F-14. “I was relieved to see a good parachute below me, and I passed this info to Desert Control.

Very quickly after the emergency call, an F/A-18 pilot from the Naval Strike and Air-Warfare Center, who also was in the area, announced he would take over as the on-scene commander of the search-and-rescue (SAR) effort.” The Captain was recovered almost immediately and transported to the local hospital for treatment and evaluation.”

After having raised his seat to have a better outside view during the landing, Vickers slowed the speed and decided to return to base “I did consider the controllability check, and I directed my wingman to check for damage to the vertical stabilizers-he found none. The faster I got on deck, the faster I would get warm. I slowed to approach speed in 10-knot increments at about 3,000 feet AGL (Above Ground Level) and had no problems handling the jet. As I approached the field, I was surprised at how quiet it got. The noise was only slightly louder than the normal ECS roar in the Tomcat.

The landing was uneventful, and Vickers was surprised to find how many people had come out to see the spectacle. “The magnitude of the situation finally set in when my skipper gave me a hug after I got out of the jet.”

Vickers and the battle-group-air-warfare commander were very lucky since all of the ejection and aviation-life-support-systems (ALSS) equipment functioned well: actually the battle-group-air-warfare commander reported only two minor injuries to his face.  Later, the mishap board surmised that during the inverted maneuver he must have flinched when he slightly rose out of the seat and pulled the ejection handle.

Text by Dario Leone at the Aviation Geek Club

I don’t do jets often but this was a special request from my son and so I took on the Tamiya kit with nervous anticipation.  Truth be told, I was also looking forward to a weathering challenge in doing a USN jet.

I purchased the kit on-line for a good price; it was advertised as damaged box and I decided to take a the small risk that the contents weren’t damaged.  This is what arrived… 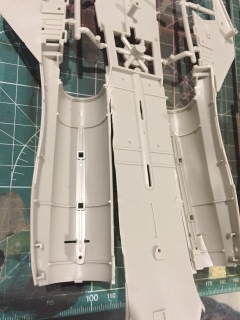 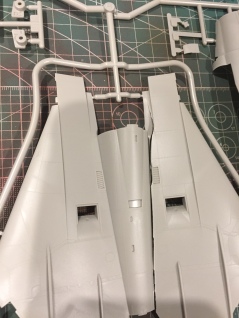 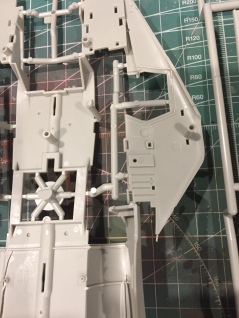 Undaunted, I pressed on.

True to form, I ignored the instructions and went directly to the main fuselage assembly.  Working very methodically, I gradually closed up the broken sections and assemble the main fuselage in stages.  Some difficulty was encountered with as the parts weren’t only cracked/broken, but they were also warped and this put strain on the repairs.

Eventually however, I was able to get a completed fuselage with the minimum of fuss and all of the surface detail intact. 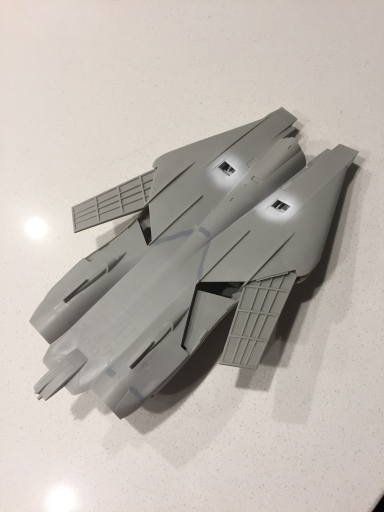 With that completed, I took on the forward section which of course included the cockpit.  As I’ve mentioned before, I don’t really enjoy cockpits but this one actually came together quite well.

I’ve mentioned before that I’m rubbish at taking in-progress pics and so the shot above is the only one I have.

In terms of the overall construction of this kit I can say it’s a Tamiya, of course it fits.  The assembly was actually quite routine and while it is a very large and complex kit I simply followed the instructions (albeit not in exactly the order they were shown in) and after several evenings and weekends of careful work the assembled Tomcat was ready for paint.

Low Vis Grey – the only way to go on a Tomcat in my humble opinion!  My son asked me to create a weathered bird; his exact words were “you can’t weather it too much, these things were dirty beyond belief.”

Rarely, for me at least, I actually pre-shaded this one.  Of course I don’t have pics – you know why – but I laid down a good marbling pre-shading and accented the maintenance panel lines and other areas that would collect dirt and grime.

Having done that, I set about the grays using Tamiya acrylics.  The key to these models, it seemed to me, is in making sure the tone and colour isn’t to mono-chromatic.  There needs to be variation in the colour to create the illusion of a scale replica of a real object.  In effect then, I suppose I am using representation techniques to create a replication (try and figure that sentence out!). 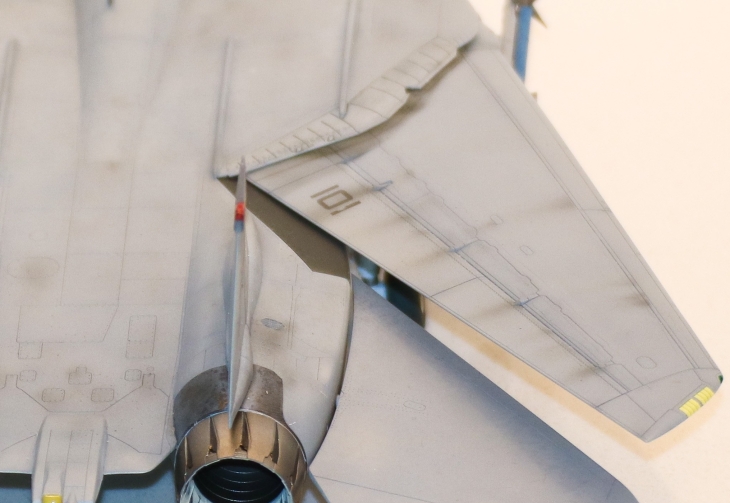 By and large I was happy with how it turned out, though my son was disappointed in the relatively clean Tomcat I was working on – he continually encouraged me to pile the  weathering on some more but he didn’t know I wasn’t finished

Before going further with the weathering I needed to add the markings.  I had previously found a decal sheet with most of what I needed and I was able to cobble together almost all of the remainder from the kit decals and a few from the spars box.

I wasn’t able to get together the correct Bu. No. and the pilot’s names are also incorrect.  I did however apply all of the stencils [almost] and all of the VF-213 markings working from the pictures.  When the markings were complete I went back to the weathering, with a bit of a risk…  I decided to go with a salt filter.

Which I didn’t take any pictures of.  Of course.

After the salt filter I went back to my airbrush and added the grime and the post-shading.  I really enjoy this part of the weathering application.  Again, my son maintained a careful watch over the process and encouraged me to go deeper and deeper into the grime bucket.  When I called it finished he was disappointed!  I thought I’d overdone it.

However, a study of these real VF-213 Tomcats will I think demonstrate he was probably more right than I was.

050912-N-5088T-001 Atlantic Ocean (Sept. 12, 2005) Ð An F-14D Tomcat, assigned to the ÒBlacklionsÓ of Fighter Squadron Two One Three (VF-213) joins-up on the port side of an S-3B Viking, assigned to the ÒScoutsÓ of Sea Control Squadron Two Four (VS-24), prior to conducting aerial refueling. VF-213 and VS-24 are assigned to Carrier Air Wing Eight (CVW-8), currently embarked aboard the Nimitz-class aircraft carrier USS Theodore Roosevelt (CVN 71). U.S. Navy photo by Lt.j.g. Scott Timmester (RELEASED)

Concurrent to the preceding I was working on the undercarriage, the missiles and fuel tanks.  The bits and pieces as I tend to refer to them.

I decided to add the Phoenix missile because the pylon looked odd without anything on it.  The rest of the ordnance was as per the photos with the unarmed Sidewinders and the electronics pod.  Incidentally, the missiles are the main reason I don’t usually do jets – they’re a little kit in themselves and I usually find them tedious.

The undercarriage is well represented and I did my best to do them justice.

Having finished the “bits and pieces” the model was actually pretty much finished.

The particularly observant reader will notice that I don’t have a lot of variety in the pics in this piece.  Well, that’s because I buggered up the first photo-shoot and the model was very soon thereafter packed up and on its way to Canada, where my son lives.

You see, I literally finished the model the day before he flew home to Canada and there was no opportunity to retake the pics.  I didn’t even take any pictures of it in “convertible” mode for goodness sake!  Later this year I may get the opportunity to shoot some more, but in the mean time this is what I can present.

Many thanks to Dario Leone at the Aviation Geek Club for allowing me to use his original piece as the basis for this article.  Check out his site, there’s a lot of good stuff there which may well provide more inspiration for me, too.

Copyright:  As usual, I make no claim of original work in this article except for the photos of the models and text describing their construction and painting.  Except where noted otherwise, I sourced all images and photos from the internet and are used under fair-use.  Any copyrighted material will be removed or credited forthwith upon request by its owner.