Born in 1917, Pete Brothers learnt to fly at age 16.  He joined the RAF in 1936, trained as a pilot and joined No 32 Squadron at the end of the year to fly Gauntlet biplane fighters.  By 1940 he was a Flight Commander flying Hurricanes with No 32 Squadron during the Battle of France.  He claimed two victories before the battle was over and the squadron withdrew to England.

The Battle of Britain opened in July 1940, and before the end of August, Brothers had shot down seven fighters and a bomber over Kent.  On September 15, having joined Squadron Leader Bob Stanford-Tuck in No 257 Squadron, Brothers shot down two bombers over London. Two days earlier he had been awarded a DFC for which the citation read:

The KING has been graciously pleased to approve the undermentioned awards, in recognition of gallantry displayed in flying operations against the enemy:—

During an offensive patrol in August 1940, this officer’s flight encountered about one hundred enemy aircraft. He led the flight in attack against them, but before this could be pressed home, he was himself attacked by a number of Messerschmitt 110’s. Turning to meet them, he found himself in a stalled position; he spun out of it and immediately sighted and engaged a Dornier 215 which he shot down. Later in the day he destroyed a Messerschmitt 109. Altogether Flight Lieutenant Brothers has destroyed seven enemy aircraft. He has at all times displayed great courage and initiative.

After the Battle of Britain, Brothers trained as a flying instructor and on promotion to

squadron leader formed and commanded No 457 (RAAF) Squadron, flying Spitfires. On March 26 1942 he shot down a Messerschmitt Bf 109, and a month claimed another probable.  Commanding No 602 (City of Glasgow) Squadron, Brothers led it during the Dieppe raid in August, 1942, and claimed one of the six victories his squadron claimed that day. One of his pilots was forced to bail out over the sea, and Brothers orbited his dinghy until rescue arrived.

Promoted to Wing Commander, Brothers led the Tangmere Wing of three Spitfire squadrons on sweeps deep into France as the RAF took the offensive to the Luftwaffe.  On one of these sweeps he claimed another victory on January 26 1943, when he shot down a Focke Wulf 190. In June he was awarded a Bar to his DFC and rested from operations.

The KING has been graciously pleased to approve the following awards in recognition of gallantry displayed, in flying operations against the enemy: —

This officer has displayed outstanding keenness and efficiency. Within recent months he has led a wing in many operations and, by his skilful work and personal example, has contributed in a large measure to the high standard of operational efficiency of the formation. He has displayed great devotion to duty.

In 1944 Brothers took command of the Exeter Wing, leading his six squadrons on attacks against transportation targets and enemy airfields on the Brest peninsula and in Normandy. Heavily involved in the lead-up to the Allied invasion in June 1944, his squadrons operated in support of the beachhead.

On August 7 he achieved his sixteenth and final success when he shot down a Focke Wulf 190 over the river Loire.  He was awarded a DSO for his “courage and brilliant leadership”.

The KING has been graciously pleased to approve the following awards in recognition of gallantry displayed in flying operations against the enemy: —

Wing Commander Brothers is a courageous and outstanding leader whose splendid example has inspired all. He has led large formations of aircraft on many missions far into enemy territory. Much of the success obtained can be attributed to Wing Commander Brothers brilliant leadership. He has destroyed 13 enemy aircraft.

Soon after however, Brothers was withdrawn from front line duty for staff work.

Following the war, Brothers was not offered a peace time commission in the RAF so he joined the Colonial Service.  However, in 1949 he rejoined the RAF.  His post war career followed with commands in bombers, attending the Staff College and serving at the headquarters of Fighter Command.  Later, he was appointed wing commander (flying) at Marham in Norfolk, where he flew the Valiant V-bomber.

In 1968 Brothers became the RAF’s director of public relations.  His success in winning the respect of the press and other media was due in part to his war record; but he was also an outstanding communicator.  After leaving the RAF as Air Commodore Peter Mallan Brothers CBE, DSO, DFC in 1973, he formed Peter Brothers Consultants and finally retired in 1986.

He gave great support to the Battle of Britain Fighter Association, being appointed its deputy chairman in 1993 and taking over as chairman 10 years later.

Vickers Supermarine Spitfire MD188, an HF Mk.VIIc was the third-to-last MkVII Spitfire to be built, coming off the Eastleigh production line in the third week of May, 1944.

Equipped with a Merlin 64 engine it was initially delivered to No 33 Maintenance Unit and was subsequently issued to No 131 Squadron in mid-June, just too late to have seen action on D-Day itself.

Its combat career as Wing Commander Pete Brothers’ personal aircraft as part of the Culmhead Wing at RAF Colerne was brief, being sent to high altitude trials only three months later on October 9, 1944.  Little else is known about its consequent use; however, MD188 was struck off charge on December 9, 1948 and was likely sold for scrap soon thereafter.

I was considering Pete Brothers’ Spitfire MD188 as one of the marking options when began this project in early December. I was saddened to read of his passing on December 18, 2008 and that made up my mind to complete this model as his Spitfire. 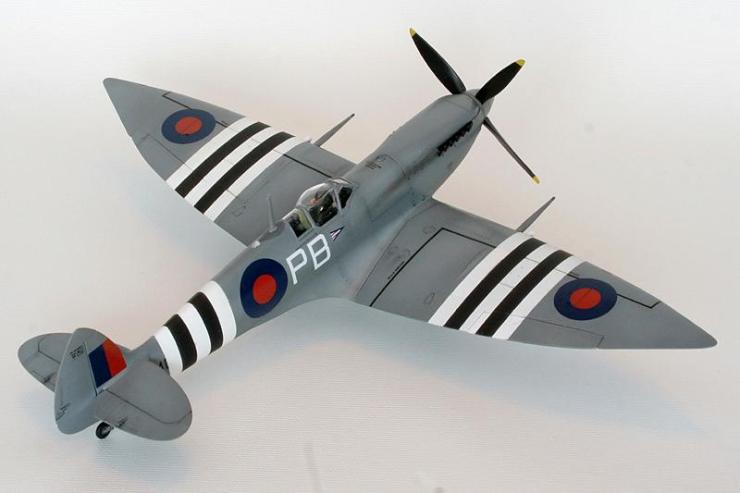 The ICM kit is a good basis to begin with, but there are several things that need to be done to make the kit a true Mk. VII. So let me begin, for the Spitfire boffins out there, with what I did do:

1. Change the glass behind the canopy
2. Change the tail wheel
3. Represent the gasket on the side portion of the windshield
4. Remove the pilot’s headrest (forgot rather than decided)

Aside from the foregoing this was a straightforward ICM Spitfire build. Care needs to be taken in assembling the front half of the fuselage but aside from that it’s really not that much of a challenge. I built this one entirely out of the box – there was some clean up required on some of the parts but the usual problem areas such as wheels, prop blades and aileron sink marks weren’t too bad in this particular kit. 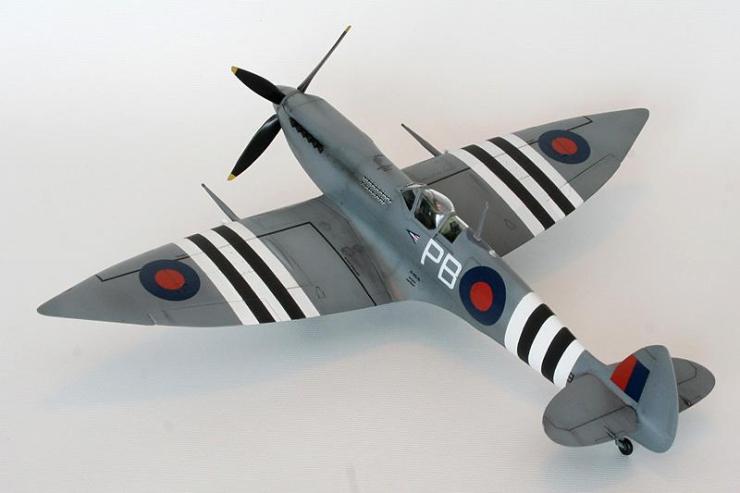 I started the painting with the invasion stripes, when done I masked them and worked on the airframe. I used Tamiya acrylic paints for the main colours, mixing the shades for the PRU Blue and Medium Sea Grey. I started with a base coat for each, then a darker shade applied to main traffic areas and a lighter shade to some panels to add depth. Finally I applied an overall coat of a highly thinned lighter shade to blend it all in. I was pleased with how it turned out. I am depicting the aircraft at a time when it had been operational for only about six weeks so I didn’t feel it should look too beaten up but certainly used. 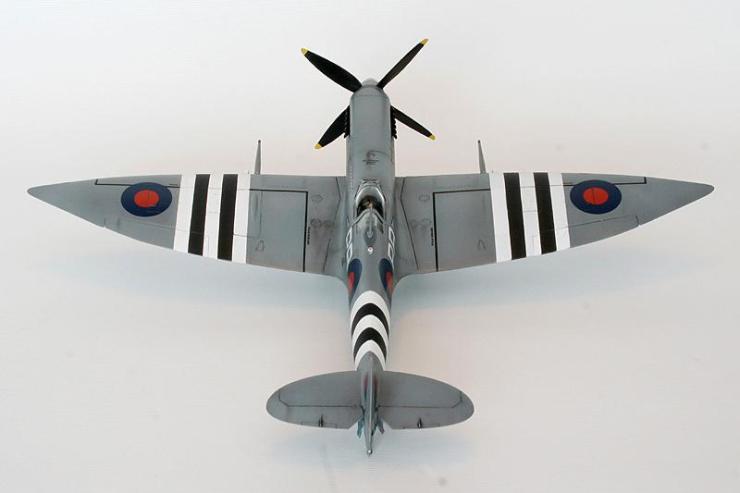 I made a couple of judgment calls on the specific markings as I had no reference photos of this aircraft. I based much of my assumption on a couple of photos of a signed model of MD188, figuring that if the man himself had signed the model than it must be close. To that end, I did apply Wing Commander pennants to both sides of the fuselage and I also applied the serial number decals in such a way as to simulate that they had been painted over with the invasion stripes. Finally, and without any evidence that they were there on the real aircraft, I decided to add 15 kill markings. I did this because I thought it plausible that they would have been there, and also for no other reason than to acknowledge that Brothers was a very accomplished fighter pilot and I wanted my model to reflect that.

After a gloss coat to prep for the decals and some light wash work, I sealed it all up with a final gloss coat before applying the flat coat. I felt the invasion stripes would be very matt, so I masked and flattened them first and then gave the entire model another couple of light coats. I was going for a satin sheen finish and I am happy with how it turned out. Lastly, I applied some pastel staining to show a little wear and tear (although only a few weeks old, MD188 would still have had to work hard the two months after D-Day as I presume there would have been a lot of sorties).

A version of this piece first appeared on Brett Green’s excellent site, Hyperscale in early 2009.  At that time it was the first model I had built in approximately two years and I was quite happy with how it turned out.  Brett was kind enough to post the article as a tribute to Pete Brothers quite soon after I completed it.  An abridged version [modeling article only] has also appeared on imodeler

I sourced the images of the aircraft profiles and photos of Brothers from the internet and are used under fair-use.  The text on the history of MD188 and the article on Pete Brothers’ life were again sourced from the internet and though I adapted the text for this article there was also some copy/paste.  I make no claim of original work in this article except for the photos of the model and text describing its construction and painting.

Any copyrighted material will be remove or credited forthwith upon request by the legitimate owner of its copyright.