The image that comes to mind when considering the Eighth Air Force fighter escort mission is likely something that resembles the image above.  An armada of bombers, usually B-17’s, escorted by swarming fighters (P-38’s and P-47’s early in the campaign and then later the P-51 Mustang).

To be fair, this is not an altogether incorrect assumption.  Despite its designed intention to be able to fight its way through enemy fighters in daylight raids to precision bomb targets deep in enemy territory, raids like the Schweinfurt–Regensburg mission in August 1943 proved that losses would be unsustainable if B-17’s, the Flying Fortress were required to fend for themselves.

Early in the daylight bombing campaign the P-38 and P-47’s lacked the range to accompany the heavy bombers deep into Germany.  This changed with the arrival of the P-51 Mustang in 1944 and the “Little Friends” were able to remain friends for the entire mission.

While the daylight bombing campaign was aimed at disrupting Germany’s ability to prosecute the war its other less often acknowledged objective was to engage the Germans in a war of attrition.  By forcing the late-war Luftwaffe (stretched to breaking point on two fronts) to defend against the bombers and their fighter escorts in raid after raid, week after week, month after month, the allied strategy wedged the Germans into an unwinnable attrition of pilot losses to which it could not possibly keep apace.

By the Summer of 1944 however, the fighter mission was altogether different.  Still, the primary activity was long range escort of the heavy bombers.  And yet, on the 12th of August these same escort fighter groups delivered the greatest ground attack ever.  On this day alone, the VIII Fighter Command flew 46 missions comprising 1,326 sorties destroying hundreds of railroad cars, locomotives, trucks, oil tanks, vehicles, bridges, buildings, and many other targets.  And nineteen aircraft on the ground.

This level of ground attack was a major factor in the victory the allied ground forces were achieving in France and was only possible because the Luftwaffe was already substantially defeated in the air.  Through 1944/45 VIII Fighter Command claimed 4,009 enemy aircraft destroyed, 283 more probably and 1,339 damaged.  Long before D-Day however the Luftwaffe was destroyed as a war-winning force and it is remarkable that it continued to inflict significant losses on the allied air forces right up to the end of the war.

Of course, a war of attrition goes both ways.  The loss of a trained pilot and aircraft in exchange for a truck or two is a poor trade.  Worse, when men such as Cpt. Francis “Gabby” Gabreski are lost to the war effort in ground attack (Gabeski was the USAAF leading ace when he was shot down and subsequently captured while strafing a Luftwaffe aerodrome), the cost seems to far outweigh the benefit of using such a finely honed weapon as the VIII Fighter Command for ground attack.  And yet, the pendulum of attrition swings again and the cumulative damage inflicted – despite the losses of highly trained and effective pilots – enabled the war to be won on the ground.

In the end the “Little Friends” were friends to more than the heavy bomber crews.  They provided a weapon that devastated the enemy both in the air and on the ground.  The fighters cleared the sky, and when they had largely accomplished air superiority they then cleared the ground, and often did both on the same mission.  They attacked the Luftwaffe where it was most vulnerable, on the ground and in doing so not only protected the bombers above, but the soldiers behind them too.

The subject of the remainder of this piece was a fine example of this unique skill-set as demonstrated in October 1944 when he destroyed two Me 262 jet fighters, crucially as they were taking off ; in doing so he delivered a perfect example of the value of ground attack as an offensive tactic to protect the bomber several thousand feet above.

Urban L “Ben” Drew joined the US Army Air Force in 1942, and trained P-51 Mustang pilots after graduating from Marian, Florida. He arrived in England in October 1944 and joined the 361st Fighter Group. Drew completed 75 missions with the 361st and became an Ace, claiming 6 kills. Drew notably shot down two ME 262 on 7 October 1944, he had encountered an ME 262 on a previous mission, and reported his experience to Allied intelligence.

On a mission in early October 1944, Drew was grounded for performing a victory roll. His punishment was repealed when intelligence reported Me 262s near Brux and Drew, with prior experience of the aircraft, was tasked with leading the mission. He was awarded the Air Force Cross for heroism, but as Drew’s gun camera failed during the mission, and his appeal for the Distinguished Flying Cross was denied. He eventually received the Distinguished Flying Cross in 1983 after the German Luftwaffe archives and the American Air Force archives confirmed both kills.

After completing his tour of duty in the European Theatre, Drew returned to the United States, working at various training bases. In 1945 he was transferred to Iwo Jima, Japan in the Pacific Theatre of Operations flying P-47 Thunderbolts with the 413th Squadron, 414th Fighter Group, 10th Air Force (Ed. which will be the subject of an upcoming  Feature on this site).

At the end of the war he was officially credited with 6 aerial kills, one ground kill, and one water kill when he sank the largest aircraft in world, the Blohm & Voss BV238-V1 on 18 September 1944.

I’m really enjoying these new generation of Airfix kits.  While they’re certainly not perfect, they do deliver great value for money, are easy to work with, go together well and to my eye, they build up into an excellent representation of the subject. 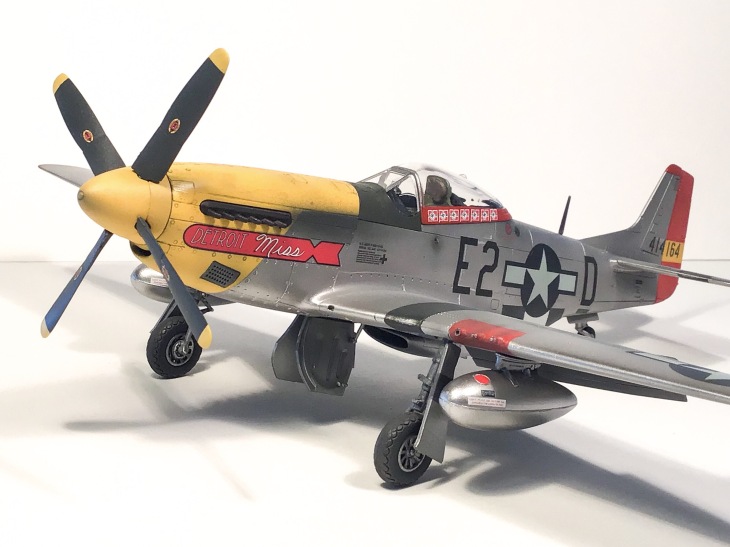 There’s not really very much to discuss here to be frank.  The kit builds up in a logical way and I certainly didn’t run into any major issues.  Like most kits, I began with the cockpit and this one went together in the course of an evening.  It’s not super-detailed, it’s not sparse – it’s the goldilocks of cockpits for me; just right.

The other thing I went to early on in the build were the wings.  There are a couple of very common errors in many, or even most Mustang builds.  Both are in or on the wings.  Mustang wings had their panels and rivets puttied flush to enhance their aerodynamic properties.  For the modeler, this means that the panel lines on our model’s wings need to be filled.  Top and bottom.

I found the image below on the discussion board over at Hyperscale.  It’s great guide to which panels to leave visible, and which to fill (reproduced here with the kind permission of Jennings Heilig).

I decided to use Mr.Surfacer 1000 to accomplish the line filling and so, after a little bit of work, my wings looked like this.

The second most common error is painting the wheel bays interior green or chromate yellow.  Practically all Mustangs had only the main spare painted chromate yellow while the rest of the wheel bay was painted aluminium with the wing.  I don’t have a pic of my model’s wheel bay, take my word for it that they are as described 🙂

The remainder of construction went as well the start.  If memory serves me, I had the model ready for paint and markings in four or five hours, of which a large portion was spent sanding back the filler on the wings.

Regular readers will know this is my favourite part of modeling.  To be honest, if someone else would build them for me I’d be fine with that!

I had decided to build Urban Drew’s “Detroit Miss” of the 375th FS / 361st FG because I haven’t done a “Yellow Jacket” P-51 before.  I had found some appropriate decals and the scheme looked interesting, as well as colourful.  I used the image below as my primary source, but there were more which I shall come to shortly.

The basic scheme is quite straightforward and I used Vallejo acrylics for NMF and the aluminium paint for the wings.  I didn’t do too much post shading at this point, I planned to weather the finish a little differently to my normal NMF approach.  After a bit of back and forth and some clean up, the basic finish was done.

When considering the rudder however, things got a bit murky.  The profile I was initially working from (seen in the background of the painted model photos above) showed the rudder painted yellow.  Other profiles showed it as red, and yet more showed it as silver. 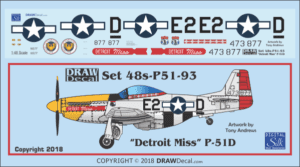 Clearly there is some variation in the colour of the rudder – or at least in the interpretation of its colour.  Looking at contemporary pics shows that the rudders were indeed painted for the most part.  Below are a selection of 361st/375th birds which show the variations.

Where did this take me? well not to labour this point too much further, this is why I elected to paint my version of “Detroit Miss” with a red rudder and yellow cutout for the serial number.  Is it right? I think it probably is but I cannot prove it beyond my reasoning above.  What I do know is that my “Detroit Miss” is different from most [all?] everyone else’s I’ve seen and I like that just on general principle.

The picture above is my version compared to the real thing.  I interpreted the lower pic to show an aircraft that was actually quite weathered.  My approach therefore was to try to replicate an NMF finish that had not seen any polishing for some time.  My first step – and this was the bit that was new for me – was to apply a flat finish to the entire aircraft.  I’ve seen weathered aluminium and it isn’t shiny, though it isn’t dead flat either; I therefore tried to leave the model with an understated sheen, a hint if you will, that it used to be shiny.

I then added a touch of light grey and began to vary the tone of the NMF.  I worked differently on the fuselage than on the wings – remember that the wings aren’t NMF at all, they’re painted – and tried to build a subtle difference in the appearance of the model’s surface.

With that done, I then added some dark gray and began to dirty up the model.  I worked on the maintenance areas in particular and while I like how it came out I also think I may have over-done this a touch.

I used a cotton bud dampened with some Windex to wear the leading edges where the theater stripes were applied and with the addition of a wash to enhance some of the surface details, particularly on the undercarriage, I decided the model was finished.

I very much enjoyed this one.  It’s not perfect of course; the most obvious problem is the missing white D-Day stripes on the fuselage undersides.  That was simply a careless error that I noticed too late to fix (without extensive rework).  I also missed the black patch around the gun camera port on the port wing root.  The major flaw in the kit, in my opinion is the overly deep panel lines on the fuselage.  Those things aside however, I am going to do more of these Airfix P-51’s, what better conclusion can there be? 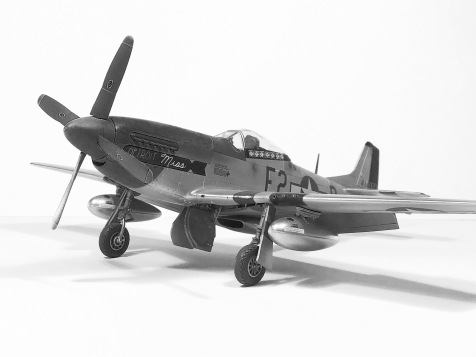 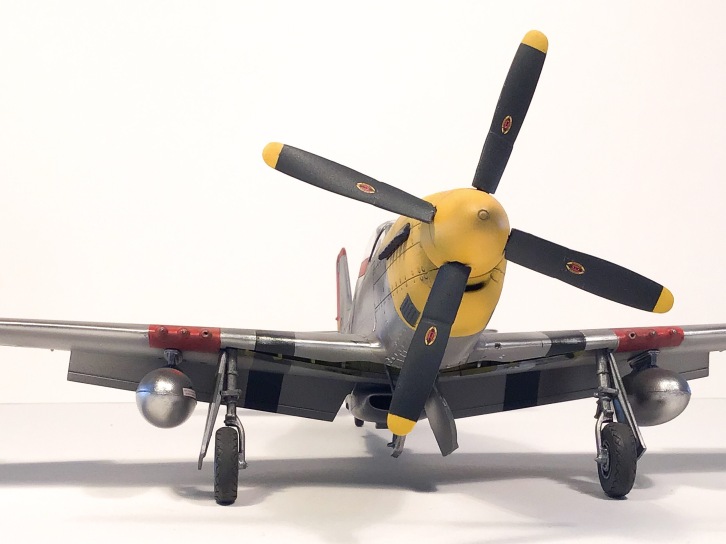 Copyright:  As usual, I make no claim of original work in this article except for the opening section “Little Friends,” the photos of the models and text describing its construction and painting.  Except where noted otherwise, I sourced all other images and photos from the internet and are used under fair-use.  Any copyrighted material will be removed or credited forthwith upon request by its owner.